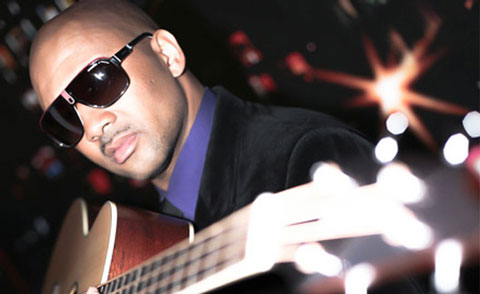 You might not know the name Alex Al but you’ve definitely heard his work.   From Michael Jackson’s bassist to recording with people like Stevie Wonder, Beyoncé and Sting, Alex is everywhere.  He recently talked with Breedlove about his various projects and of course about his Breedlove gear.

Breedlove: You have done so many things in your career…what is the first thing that jumps out as a memorable moment?

Alex Al: First off, I'd like to thank you for asking me to be Breedlove's featured artist this month.

Probably, the most memorable moment for me would be getting the call for Herbie Hancock's Grammy award winning 'Tribute to Gershwin' project. I didn't know it at the time, but the record would go on to help break down the musical barriers between classical and jazz music. The project also featured the legendary genius of Stevie Wonder, with whom I had worked with, and it also connected me with legends, Joni Mitchell and Wayne Shorter, all in a single day. It was an amazing record to be a part of.

BL: Being on the Michael Jackson “This is It” movie…what was that like:

AA: Working with Michael in the 'This Is It' movie, was one of greatest musical experiences of my life. Being there with him everyday taught me the importance of hard work, perseverance, and being committed to your art 100%, while striving to always be kind to others in the process. To be able to support Michael during this musical venture was truly an epic experience for me. No one knew it at the time, but the King of Pop was making history all over again with 'This Is It'. It went on to become the most successful music movie documentary of all time. In its first opening weekend it grossed $101 million worldwide, making it the number one film at the box office, and on its theatrical run, the film's worldwide revenue gross was nearly $300 million. The love for Michael's music is ever growing and worldwide. To be a part of this was truly a magical journey, a musical and memorable gift that I greatly cherish. We all miss him dearly.

BL: Do you have a favorite Michael track?

AA: Being a long time fan of Michael's music, and fortunate enough to also record with him in the studio, I would have to say that 'Human Nature' is one of the most beautiful melodies I have ever heard Michael sing. It's also one of the best songs in the history of pop music in my opinion.

BL: Also being a session musician you’ve had the chance to play on quite a few albums.  Do you have a style of music you like best?

AA: I've been asked that many times. I don't really have a favorite style of music. I mostly enjoy combining different styles of music together. I feel when done authentically, it brings a diverse group of people together, which I think is always a good thing. I come from a very diverse musical family. Each family member had a definitive style of music they cherished from Gospel, Rock, Blues, Jazz, Classical and Soul music. I think I embraced it all and the love they had for it, and I try to bring this musical focus into the studio when recording bass on Pop songs. Growing up in such a diverse musical place as Detroit, Michigan, the sounds of Motown and every other style of music was on the radio. As a result, it has always been my goal as a bassist to combine the Motown bass sound of the legendary James Jamerson with the Minneapolis bass sound of Prince.

BL: Who is the best player you’ve recorded with?

AA: On genius musical level, I would have to say Stevie Wonder. He is a true musical genius several times over.

BL: You just recently came off the Arsenio Hall Show.  We were lucky enough to come watch and it was full of energy.  What’s the big difference with playing for a live TV audience and play on stage for an arena?

AA:  Anytime I work with late night icon, Arsenio Hall, a good time is always had by all. Everyday Arsenio brought this creative positive energy into the TV studio, so as his bassist I wanted to make sure I did the same. Being on his stage with a great group of musicians, the Posse 2.0, you realize that it's like being in the recording studio and playing live at the same time. You know every note will be heard for a lifetime, yet you have to take creative chances to keep things exciting.

In an arena, you have that tidal wave of energy coming towards you being in front of 50,000 people. You rise to the occasion and you have to deliver that energy and more back to the audience. It's really what sharing your gift is all about on many levels.

BL: Let’s talk gear…you play a Breedlove Studio Bass and a Premier 12 string.  What do you like about those instruments?

AA: I really love the Premier 12 string guitar. It's a beautiful instrument, and every time I pick it up ideas flow through my hands like never before. The tone is full and rich, yet very clear. The Studio acoustic electric bass has a great tone with great response. It's able to really cover any style of music, which works well for me. These two instruments work well together, because I can track both guitar and bass on any given song, and the combination is massive in sound!

BL: What’s next for you?

AA: With a demanding session schedule, which I am truly grateful for, I am working on my solo record in between projects, and I am writing for other artists as well.  I feel that it's an exciting time for a songwriter and musician, with so many things going on in the world that need to be brought to global awareness through music. This is one of the reasons I believe God gave us music.